Dømt til ild og bål was the usual sentence, condemned to be burnt at the stake. In the seventeenth century Vardøhus fortress, that time the easternmost remote outpost of the Kingdom of Norway, 91 people — in the vast majority Norwegian women and a few Sami men — were sentenced to death for practicing witchcraft — if they had not been already tortured to death during interrogations. The detailed court records concerning the trials survived, bearing witness to the insanity of terror in the name of religion.

In 2011 the trend to grant the past injustice victims recognition and to apologize at least symbolically has reached the far-north Norway’s Finnmark province as well. The victims of heksejakten i Vardø (witch hunts in Vardø) were commemorated with a remarkable memorial built at the execution place called Steilneset on the shore of the tree-less and wind-swept Vardøya island where the town of Vardø survives in the harsh conditions of the polar zone for at least 800 years.

In theory the memorial was an initiative of statens vegvesen, the.e Norwegian public roads administration, responsible for improving or developing the infrastructure for travelers visiting places of interest along the so-called national scenic routes, nasjonale turistveger. (Actually, the island of Vardøya is formally the northern end of the E75 European route, the southern one being the Greek island of Crete.) It is however much more than a rest area and viewpoint, an expression applied to classify the Steilneset memorial on the nasjonale turistveger web site, something very remarkable and unusual. Its primary role was officially thought to draw visitors’ attention to this beautiful, but rarely frequented remote part of Norway, but the result has surely far exceeded in ambition what one expects from a standard tourist attraction. In 2011, Her Majesty Queen Sonja attended the opening of the memorial at the end of the inhabited world. A painful history presented in a public space, a

It is probably the last work of the renowned artist Louise Bourgeois before her death, and the well-known architect Peter Zumthor (& Partner), who both consulted Liv Helene Willumsen as a historian, with a support from local authorities. Two buildings with artistic installations inside, seemingly different in style, but surely complementing one another. Art, Architecture, History.

Approaching from the Vardøhus fortress side, one is confronted with Zumthor’s contribution, a memorial hall inspired by long racks for drying fish, so ubiquitous in the North. Indeed, drying the fish was the occupation of the fishermen women, whom the most victims were. The long hall is made of hand-sewn strong sail canvas suspended with steel lines from the long wooden framework stretching along the near island shore, another feminine accent. The hall is entered from a wooden bridge. Inside one is confronted with a long suspended gangway made of wooden planks surrounded by black canvas walls forming a narrow corridor. Along the walls 91 steel windows are placed in different heights, never the same height for opposite windows, each equipped with a small electric light bulb for each victim, according to the tradition of window lights well preserved in the whole Scandinavia. Judge verdicts texts provided by the historian Liv Helene Willumsen are presented by each window for each named person, kept very subdued in style, nothing exaggerated, as Willumsen expressed it. A long, long dark corridor with death sentences on the wall, with the sparse light from the small windows or the weak lamps. Quoting the statens vegvesen website: an emotionally charged place. Inside, one can hear the sea waves — and on windy days the construction swings slightly with the gusts.

Exiting the corridor to the daylight (or to the polar night!) one approaches a very different cubic building designed by Bourgeois, with smoked glass walls in a weathered steel construction frame. Inside in the middle of a spiral-like volume, there is a chair with an ever-burning flame on its seat, representing the traditional eternal flame (from one point of view) and/or suggesting horrible associations with the stake (from another). The flame is reflected in seven oval mirrors arranged in a slight spiral and leaning over the chair. The formal title of the installation is The Damned, The Possessed, The Beloved. A second symbolic place remaining in one’s emotional memory, a perfect but not-so-easy-to-interpret addition — an angry emotional reflection? — to the silent but powerful narrative of the suspended canvas hall.

Quoting Liv Hellene Willumsen: […] Steilneset Memorial due to art, esthetic qualities and symbolic power, managed to give the victims a dignity they never experienced in their life.

We have visited the place arriving by the sea. The northbound Hurtigruten post ship heading to Kirkenes arrives at Vardø 03:30 and leaves at 03:45 hours in the night, no chance to make a visit. However the southbound one arrives from Kirkenes at 16:05 and sets sails at 17:00 hours. This leaves some 50 minutes time for passengers to visit Vardø, with the interest of the traveling public divided between the near and well-preserved and interesting Vardøhus frontier fortress re-built 1734 and the more distant Steilneset Memorial. It is about 1km from the harbour, a good walker can make it — still having from comfortable 15 to risky 30 minutes at the actual memorial site. In our case, it was getting dark quickly in October.

Naturally, if you arrive by car via the undersea tunnel connecting Vardøya with the mainland, you will have surely as much time as you wish. By the way, you may then visit the mountain of Domen (with a shelter, thanks to statens vegvesen, of course) where the daughter of one of the already executed witches, 12 years old Mari Olsdatter according to her confessions on 26th January 1663 celebrated the midsummer eve together with numerous other witches and the Satan himself, who had shown her before the entrance to Hell. Prompted at the trial, she pointed to five other women:  trollkvinne!…

At least from this time the end of the Varanger peninsula with the mount of Domen and Vardø confirmed its reputation as the definitive northern end of the world, Ultima Thule, where the Satan dwells and the Hell entrance is situated. And even now, you are still reminded in Vardø that the hell is still there: for someone arriving with a arriving by ship, the NATO GLOBUS radar station observing the fringes of the free world at the shores of the Barents Sea cannot be overseen.

In the following a few pictures from our visit in Vardø with Hurtigruten ship m/s Richard With. 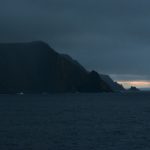 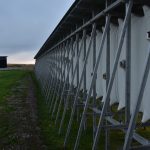 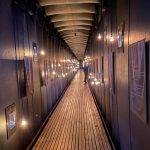 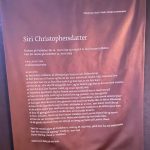 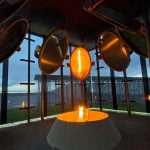 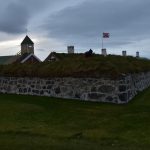 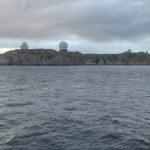 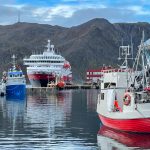 Below, the translation of the death sentence of Siri Christophersdatter, provided by Liv Helene Willumsen (displayed in a picture in the gallery above).

Born on Senja | Lived in Vardø | Worked as a maidservant

Confessed
that she learnt witchcraft on the farm Øvergård on Senja, from Siri Pedersdatter
that Siri came and asked her for grain when she was threshing in her foster father’s barn
that she replied that she dared not give away any of her foster father’s grain
that Siri told “You will regret this”, and asked her to chase away the cow outside the door
that she bade the cow to go to the Devil, and it burst asunder at once
that the Devil appeared before her in the guise of a man in black garb, with horns
that he bade her to call him Jacob and promise to serve him, which she did
that she subsequently taught witchcraft to Mari Tamisdatter, who also worked there
that she gave Mari powers in breads he had received from Mette Nilsdatter
that the Evil One appeared before them as a large, black man with claws
that thy had to play cards with him, and when they lost, they had to serve him
that he, in return, promised them all they needed
that she, Kirsten, Mette and Mari cast a spell on Laurits Olsen’s boat and men
that she, then, wore the guise of a raven, Mette that of a seal and Mari hat of a seagull
that the reason was that she was angry with a hired hand, Mette with Laurits Olsen

Convicted of practice of witchcraft

Sentenced to be beheaded

If you got interested, the following links are a good start for your own investigations: