I have just finished a monumental work of indexing an old church book Matrimonium metrica ecclesiae parochialis s. Bartholomei Apostoli in Stashowo scripta  surviving in Dioecesal Library in Sandomierz, Poland, signature BDSand AKKKS 653. The scans of this book are available publicly online under the link oai:bc.bdsandomierz.pl:2180.

A page with a note about the marriage between Szymon Brzezowski and Katarzyna Szwaydakówna, Staszów, 14th February 1719

The book contains over 2600 notes concerning marriages in the Roman catholic parish church of Staszów, a historical town in Poland, over a larger span of time, 1613 — 1751. Probably erroneously, one can find there also four baptisms from 1674 and just one note of the funeral of Katarzyna Gryna or Gayna, deceased 1727 when circa 60 years old.

After tackling with the church book containing Staszów baptisms 1614 — 1671 about a year ago and starting the next baptisms book arriving in the time span from 1671 to 1680 (vide a post about the three books), I have decided to work on the marriage book first, because from the point of view of the genealogy, the marriage books are the most precious source of information about our ancestors.

The rough result of the work can be found under: 653_index. The indices will be transferred soon to the site geneteka.genealodzy.pl containing a data base of indices of metrical data from this part of Poland.

The featured image of this post shows a typical text of a marriage note, concerning my personal ancestors, Szymon Brzezowski and Katarzyna Szwaydakówna who married in 1719. Due to the fact they had at least four sons (Walenty, Antoni, Baltazar and Stanisław) who all survived childhood, all married and all had sons, they eventually grounded a number of parallel lines carrying the same name living in Staszów in 18th and 19th centuries, a genealogical nightmare in finding out who is who without any previous knowledge. And if you add all these daughters married farther or nearer neighbourhood, one has a feeling the whole town is one large family.

The picture left contains a typical page of the manuscript containing the marriage note mentioned above. This page is pretty readable, because it was probably re-written or copied carefully together with a greater amount of marriage notices written with one hand, page by page.

The worst written notes are these written spontaneously and without care… Like the one taken probably just after a huge wedding with a number of prominent guests, with a strange handwriting and abandoned in the middle only to be written again neatly, just below the abandoned one, probably late the next day when the priest’s head restarted…

The manuscript contains a lot of small comments, some of them do have a serious historical significance, for example one can find out that the town burned between 27th February and 1st March 1620. There are also notes from visitators, with one of them with which I would thoroughly agree. I leave it in original Latin so that you might enjoy translating it yourself, with my humble transcription included. 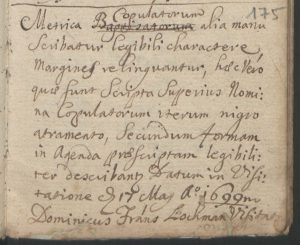