We climbed Hjörleifshöfði after a spontaneous decision on one of these typical Icelandic dark days when very low clouds and wet wind in combination with black earth and contrasting green summer meadows on the flat mountain make you feel somehow out-of-place and awkward. Definitely, Hjörleifshöfði kept its promise to be one of the most atmospheric places in Iceland. A few pieces of information collected from various sources.

Hjörleifshöfði is a lone table mountain, a proper inselberg, stretching out of a surrounding black Mýrdalssandur plain in the southernmost shore of Iceland nearby the town Vík í Mýrdal. And indeed, it was in not-so-far the geological past a near-shore island, until the eruptions of Katla volcano and the following steady flow of glacial sediments from Mýrdalsjökull — the glacier covering the Katla volcano caldera — systematically enlarged the outwash plain surrounding it so far that the present flat shoreline lies well over 2km south from the southern mountain edge, as you might see in the featured image.

In the times of the settlement of Iceland, it was probably an island or a cape stretching from the shore into the ocean, a nearby flat river estuary or a lagoon could be used as a safe harbour. The rocky promontory of Hjörleifshöfði, 221m high over the ocean level, is of volcanic origin, and a glacier covering it in the past abraded its upper surface to the present form of a table mountain. The consequent Katla eruptions covered in parts the yellowish rocks of the mountain stock (palagonite) with black ashes and tuff.

There is a cairn on the highest point, named Hjörleifshaugur or -hraun, believed to be an old Viking cairn grave and a slightly risen quadratic platform of a much younger (1899?) graveyard with at least three discernible graves, as well as a monument built by Danish surveyors, marked already on the topographic map of the area published 1905.

According to the story recorded in the first chapters of Landnámabók, the grave belongs to the one of the very first Viking settlers of Iceland, Hjörleifur Hróðmarsson, a blood brother of Ingólfur Arnarson, or formally his second cousin — they had the same great-grandfather. Landnámbók — although treated as half-legendary — is one of the most reliable sources about the earliest history of Iceland. It states that just upon their almost simultaneous arrival about the year 874, their parties stayed over the winter on the separate islands by the shores of Iceland’s mainland, named later after them, Ingólfshöfði (now a well-known puffin colony) and Hjörleifshöfði. However, Hjörleifur was not so lucky as Ingólfur, who became the first really permanent resident of Iceland — he was killed the following spring (875?) by his Celtic thralls (slaves) he brought with him from his previous Viking raids in Ireland. The killers fled afterwards to the Vestmannaeyjar islands only to be traced and killed themselves by enraged Ingólfur. Vestmannaeyjar are actually named after these enslaved Irish, called that time Western Men by Vikings. Ingólfur and his men are supposed to choose the place for Hjörleifur’s grave on the mountain top. After taking his vengeance, Ingólfur settled finally and successfully in Reykjavík, grounding a permanently inhabited country of Iceland since then.

Presently almost unbelievable, but true, a farm named Hjörleifshöfði existed in this rather inhospitable place of Hjörleifur’s landing for a very long time. In a place just below Katla, a very active volcano, with its largest known eruption appearing already in ca. 934. Also hard to grasp, one of the main sources of income of the farm were eggs and chicks of the birds nesting in the rocks, treated as a much sought-for delicacy in Iceland. The original farm existed on the plain to the west of the mountain, in a place called now Bæjarstaður (presently a car parking!), which is believed to be the very place Hjörleifur had chosen for his winter camp. After destruction by a massive flood caused by a serious Katla eruption on 11th May 1721 and after over 30 years of abandonment (Katla erupted again in 1755), a new farm was built much higher, on the meadows covering the lower parts of the table mountain. The oldest ruins, still marked on the Iceland map of 1904, were wiped thoroughly out or covered during another intensive Katla eruption in 1918. The eruption caused massive debris flows which extended the shoreline a few kilometers to the south. People parking their cars on the present parking place maintained by the Katla UNESCO Geopark would not notice anything resembling farm ruins. 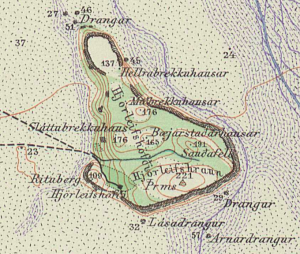 Hjörleifshöfði on the 1905 topographic map

The last inhabitant abandoned the farm most probably after 1936, leaving the mentioned above graves on the top of the mountain, namely: of Markús Loftsson, a nature loving man living in a turf house just on the very cliff edge named Bæjarbrekka and author of one of the first books about volcanic activity on Iceland Rit um jarðelda á Íslandi published 1880, of his much, much younger wife Áslaug Skæringsdóttir and of his brother Sigurður Loftsson. Some sources mention that an unnamed child of Áslaug and Markús is also buried here. Áslaug Skæringsdóttir married the Hjörleifshöfði farmhand Hallgrímur Bjarnason just after the death of Markús. Consequently, Hallgrímur enlarged the farm against the previous wishes of Markús who steadfastly did not want to change anything in the surrounding of the farm. It is not clear if he also found his final rest on one of these most remarkable graveyards of Iceland. Maybe worth noticing, the 1905 map (1:50k) shows one farm site and on the map from 1936 (1:100k) it seems(?) only a part of the farm is marked as an inhabited place.

And yes, of course, Hjörleifshöfði is suspected to be inhabited by elves. Or hidden people, rather. Anyway, reportedly a lot of unexplained things happen here, also in connection to the Viking grave on the top. People feel attracted to this place, there seems to exist a force causing them to visit the place again and again. No wonder, even without supernatural forces, the place is worth visiting not only once… As we made fresh coffee in the lunchtime on the picnic place below the mountain, I spilled semi-consciously some of the morning coffee left in our thermal cups on the ground. Well, the Icelandic ghosts must be caffeine addicts.

There is a rewarding marked trail from a parking with informative tables and a picnic place following the most probable Hjörleifur funeral route to his grave on the top, and then down via Bæjarbrekka and ruins of the last farm back to the parking place. A cave in the southwestern walls of the mountain can also be visited. Hjörleifshövði position on the OpenStreetMap.

There is an enthusiastic description of this very specific place by Regína Hrönn Ragnarsdóttir in two parts: a historical and a more practically oriented one. Noticeably, she claims to be a descendant of Ingólfur Arnarson (*844) and Hallveig Fróðadóttir (*850).

By the way, 1168 Augustinian monks grounded Þykkvabærklaustur monastery on the broad Mýrdalssandur plains nearby Hjörleifshöfði, east of the Kúðafljót river (turned after the Reformation into a farm, abandoned finally in 1945). One of the most prominent persons connected with it is its first abbot Þorlákur Þórhallsson, treated after his death as a saint and buried in a shrine on the altar in the Skálholt cathedral. His cult — numerous churches in Iceland were consecrated to him — had a strong Icelandic national note in the times of Norwegian and Danish rule. No wonder that as Denmark introduced the Reformation in Iceland, his shrine in Skálholt, meanwhile a prominent pilgrimage site, was thoroughly destroyed. Formally canonised first in 1984, St. Thorlak, properly Þorlákur, is treated in the catholic church formally as the patron of Iceland and considered informally as the patron of autistic people.

A picture gallery from our visit to Hjörleifsheiði. A day before our visit there we climbed from Þakgil to the Sker mountain with a view on the edge of Mýrdalsjökull, its broad tongues and glacial waterfalls from which the water flows into the ocean through the Bautakvísl estuary just below the walls of Hjörleifshöfði. 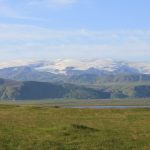 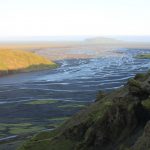 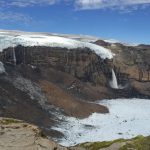 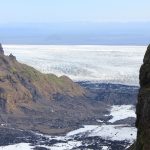 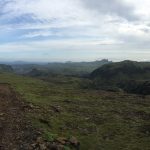 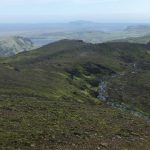 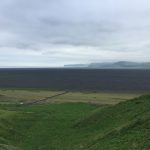 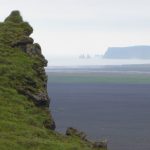 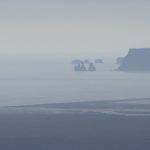 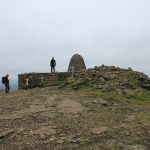 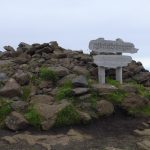 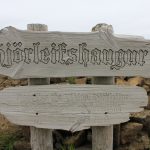 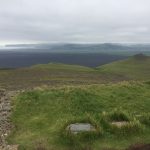 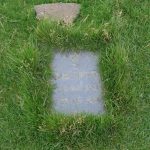 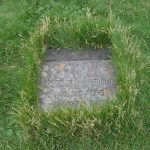 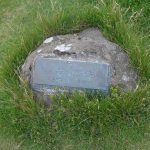 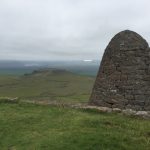 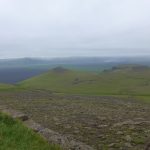 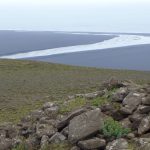 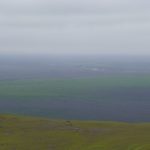 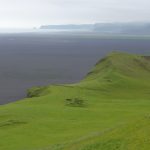 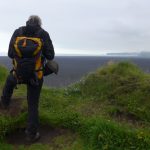 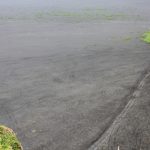 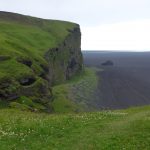 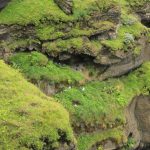 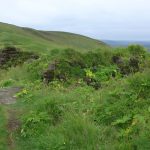 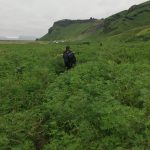