The famous Dwejra rock arch on the coast of Gozo, Malta’s second island, known informally as The Azure Window, formally it-Tieqa tad-Dwejra,collapsed in storm on 8th March 2017 at about 09:40 hours. 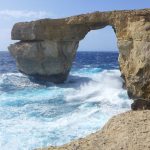 The picture of the still standing arch was taken on 19th June 2016 as we visited the island. Cracks were already clearly seen. There was quite a lot of people who dared to break the no-entry rule, cross the barriers and walk over the top of the arch. It felt like viewing someone committing a sacrilege. A premonition? 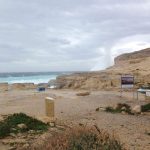 The picture is taken from the tweet of Malta’s Prime Minister, Joseph Muscat, on 8th March 2017. The rock arch is gone forever. The breaking news article from the Times of Malta: ‘It is as we never had an Azure Window’. 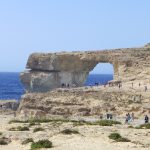 And here a picture of Dwejra from June 2016 taken from a similar angle as the picture above from March 2017.